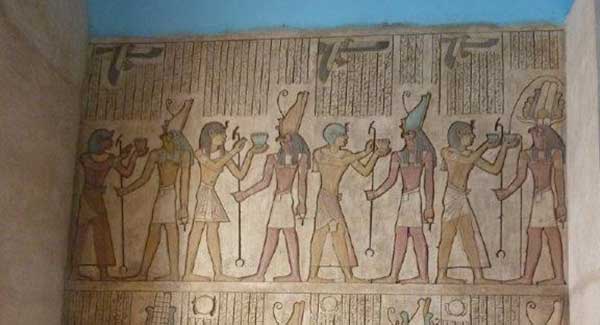 In the period 19-29 November we offer a special healing week combined with culture and Egyptian Yoga in Abydos. It is a program that will open your heart

Nov 19 Arrival at Luxor airport, you will be brought to your hotel.
Nov 20, 21 visits to Luxor Temple Karnak, Temple of Hatseput, the valley of the Kings,
Nov 21 in the afternoon we drive to Abydos where we will stay in the healing Hotel House of Life
Nov 22 – 28 daily morning sessions of Egyptian yoga with Caroline Chevat, workshops like breathing /sma Taouy, Silence, verticality (2 hours a day)
Visits in Abydos: Temple of Sety I, the Temple with its beautiful reliefs that has been built in ancient times to heal people. It transforms people and touches the hearts; behind it is the mysterious Osirion that surprises all visitors. It may be one of the oldest sites of Egypt.
during the week you will experience two ancient Egyptian healing treatments of your choice like ancient Egyptian foot massage, sound healing, massage, personal ritual
Ancient Egyptian music and dance, the Zar
In the evening. lectures on ancient Egypt
Nov 28 Drive to the Hathor Temple in Dendera and afterwards to our hotel in Luxor, Light show in Luxor
Nov 29 in the morning Flight from Luxor airport

The tour is organised together with our travel agent Jasmine.
The price for this arrangement is € 1220,- and includes transportation, all meals, hotels, lectures, workshops, two personal treatments. The air flight, entry fees and tips are not included.

Few people are aware that the Ancient Egyptians had breathing techniques and postures that are comparable with the yoga that became known to the Western world by Indian Masters.

But Breathing is of course as old as mankind. It has been regarded as a pathway to self knowledge in many cultures, strengthening both the body and the mind, but in each place it was adapted to their culture and their spiritual beliefs.

In Ancient Egypt yoga was called Sema Taouy , that can be translated by Hatha Yoga. For the ancient Egyptians unification (of spirit and body)was extremely important. They had an attitude to reflect this inner desire symbolically in many ways. You may see it as symbolized in the unification of Upper and Lower Egypt. You see it in the Postures of many of their Gods. The goddesss Maat, symbolizing justice, was a goddess connected with every pharaoh. The lives of the pharaohs were thus strongly connected with the gods, with spirituality. The way they integrated the spiritual thinking of the gods in their daily lives illustrates this.

The Yoga from the Ancient Egyptians adds another new dimension

Next to breathing a central theme in Egyptian yoga was Verticality. The Egyptians were very impressed by the movements of the stars in the Cosmos. They felt strong connections to the stars and studied the movements intensively. In their yoga they wanted to be a channel for the energy flowing up and down from the Earth to the Universe :verticality.

Prof Muata Ashby gives lectures Ancient Egyptian yoga in the Sema institute in the United States. He found out that many postures and exercises that are common in Yoga today where already practiced thousands of years ago in ancient Egypt. The source of Yoga may be different from what we think today.

From November 19- 29 the House of Life in Abydos organizes a workshop in which you will experience this ancient Egyptian Yoga in a very special way.

Caroline Chevat from France will give two sessions of ancient Egyptian yoga daily. She has dedicated her life to the dance, music, yoga and culture from Ancient Egypt and is teaching in various European countries.

The Temple of Sety I is at five minutes’ walk from the hotel. This Temple will open your heart  as it was build in ancient times to heal. The priests of Abydos were famous all over Egypt. Pilgrims came from everywhere to Abydos to get healed. Walking through this Temple surrounded by its beautiful reliefs brings you in another world. It feels like a yoga meditation itself. In the pictures and myths you may recognize the link to the exercises and thoughts of ancient Egyptian yoga.